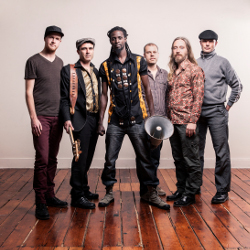 Melbourne has been at the centre of the contemporary funk and soul scene for many years now. It seems the city can’t stop producing music that heavily borrows from the classic sounds of soul, funk and r ‘n’ b of the sixties and seventies while retaining a modern edge. Bands such as The Bamboos, Cookin on 3 Burners, The Putbacks and The Cactus Channel are just a few of Melbourne’s finest. Well it seems that we need to add afro-beat to that list now.

Returning after something of a hiatus we are delighted to hear that another Melbourne-based outfit, The Public Opinion Afro Orchestra (POAO) have returned with a new 45 on Hope Street Recordings.

The A side, Cosmetic Love, is based on a jam session recorded at the Hope Street studio. The session which was based on an idea by Putbacks guitarist Tom Martin and which laid dormant for some years. Rap lyricists 1/6 came across the session, feeling inspired he laid down some lyrics to the backing track. Add to that some additional organ, percussion and brass and a new track materialised.

The B side, Jappo, and our pick of these two tracks sees The Public Opinion Six (formerly known as The Afrobiotics and the rhythm section behind POAO) take the same idea and re-create it. Producing a completely new track with lyrics performed by Lamine Sonko. This is authentic Afro-beat direct from Melbourne via Lagos.

With a new LP on the way, and if this 45 is anything to go by, The Public Opinion Afro Orchestra will be delighting our ears with more of their afro-beat influenced music.

If you’re in Melbourne make sure you get on down to the Launch Party (details below). 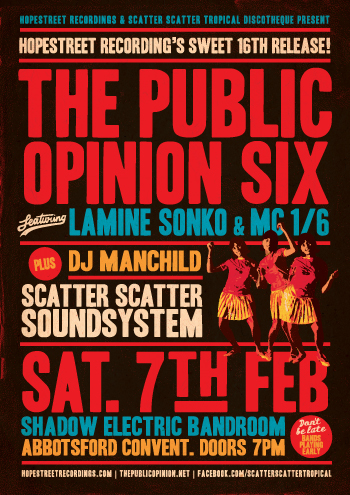