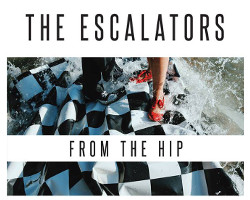 Friday night sees The Escalators hit Canberra for the next installment of the tour in support of their new album – ‘From the Hip’. Fresh from the sold out launch party at The Milton Theatre the band are back in Canberra.

The blues/jazz/reggae outfit are a regular thing up and down the East Coast with regular spots at Cuppits Winery and Batemans Bay pier.

‘Open Fire‘ is the first single to be released from the album and recently hit the number one spot on the  Triple J Unearthed Roots Chart.

The Canberra show will take you on a tour of the band’s two releases (‘From The Hip’ & ‘Felix’), with insight into how the music came together, tales from the recording studio & the road, & the stories behind the songs. All ably assisted by Music for Modern Living’s very own DJ Nigel Gentry spinning funk and soul vinyl 45’s.