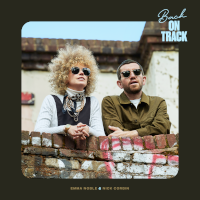 If you are into Contemporary Soul music and haven’t heard the names Nick Corbin and Emma Noble then you must have been living under a rock. These two singer/songwriters are the future stars as soul music.

Nick was the lead singer of UK soul band New Street Adventure. The band formed in 2007 and released two albums on Acid Jazz Records. Their music was steeped in classic soul with that modern twist that underlays everything we love about Contemporary Soul. Nick had a good start, his dad being a Northern Soul DJ and record collector. It was almost written in the stars that Nick would be involved in Soul music one way or another.

The most well known New Street Adventure track has to be The Big AC. Nick wrote the song about his dad after attending his first Northern Soul allnighter at the infamous 100 Club in London.

Watch the video for The Big AC here.

The band split up in 2018, Nick had originally planned to write music for other people but to our delight has been releasing a steady stream of solo material. If you haven’t checked out his debut solo album Sweet Escape then you really should. Nick releases his music on his own inprint Big AC Records.

Emma Noble was one of the backing singers for New Street Adventure and is also one half of the senstaional DJ Duo Noble and Heath. Emma wrote two songs with Adam Gibbons aka Lack of Afro for his Hello Baby album released in 2016.

In the last two years Emma has released a trio of solo tracks Woman of the World, No Turning Back and Table Dancers. She also teamed up with actor and musician Matt Berry to record a cover of Beatmaker, a 1970 Psych-Funk number by Swedish singer Doris. Emma has started performing her music live, the first couple of live gigs receiving critical acclaim. Keep an eye on Emma’s social media for future dates.

Now on to the new release. This isn’t the first time Nick and Emma have teamed up, their first collaboration, a celebration of mates, music and dance culture – ‘We Gonna Live Forever‘ was released in 2021.

Back On Track is the new single from the duo. An uplifting and upbeat tune that conjures up images of summertime. A tribute to those people in our lives that get us through hard times. The song kicks in with a simple but groove-laden organ and horn stabs before the vocals come in. Emma starts of proceedings with her unique and inimitable vocal style, then alternating with Nick, in an almost call and response manner. Until they ultimatley come together in unison. The contrast between their voices is quite incredible, Emma’s high register contrasted with Nicks slightly lower just works beautifully.

This pair remind us of classic soul duos such as, Marvin Gaye and Tammi Terrell. Big things surely to come from both artists, hopefully including some more duets.

Back on Track is out now digitally, 7″ Vinyl due for release in July 2022.

Stream via Spotify or Pre-Order the 7″ Vinyl on the Big AC Records website.

Record Kicks: Three CD’s For The Price of One »
« Sam Redmore – Just Be Good To Me