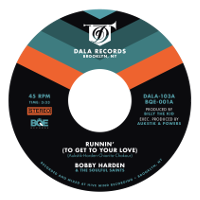 “Runnin (To Get To Your Love)” is the debut single from Bobby Harden & The Soulful Saints.

For the uninitiated, Bobby Harden has been around the traps for a long time now. Originally from Youngstown, Ohio and now a resident of the Big Apple. He is the lead singer with the Original Blues Brothers Band. Led by music icons Steve Cropper and Lou Marini, the band keeps alive the tradition started by Belushi and Akroyd.

For his debut single, Bobby Harden has teamed up with Dala Records and BQE Records, the latest venture by Kurtis Powers of the Face Radio. Backed by the Dala Records in house studio band, “The Soulful Saints“. Who have performed live and recorded together with acts such as Sharon Jones & The Dap-Kings, Charles Bradley & His Extraordinaires, Lee Fields & The Expressions, The Budos Band, Mark Ronson, Antibalas, The Impressions and more.

“Runnin (To Get To Your Love)” is pure classic soul. If you didn’t know better you would swear it was some long lost forgotten gem. Having received radio plays from Craig Charles (BBC 6 Music), Eddie Piller (Totally Wired Radio) and our very own Nigel Gentry (Blue in Green Radio). The long awaited release of this 45 is almost here.

Due for release on November 22nd, preorders are available via the Dala Records Website. It will also be available in your local record store and online at juno.co.uk from November 29th.