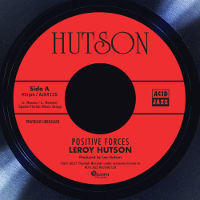 Acid Jazz Records have announced that they will be releasing a previously unheard Leroy Hutson 45.

The track ‘Positive Forces’ was originally recorded in 1977 and was premiered on Gilles Peterson’s BBC Radio 6 show yesterday. The b side of the 45 features a full length instrumental of ‘All Because of You’.

This limited edition 45, due for release on 23rd June 2017 will only be available as a pre-order via the Acid Jazz Records website. So get your orders in quick: Pre-order here.

And the good news doesn’t stop there. Acid Jazz have entered into a long term licensing deal with Leroy Hutson. An absolute soul legend, Leroy was the man chosen to replace Curtis Mayfield in The Impressions and had a very successful solo career for Curtis’ own Curtom record label.